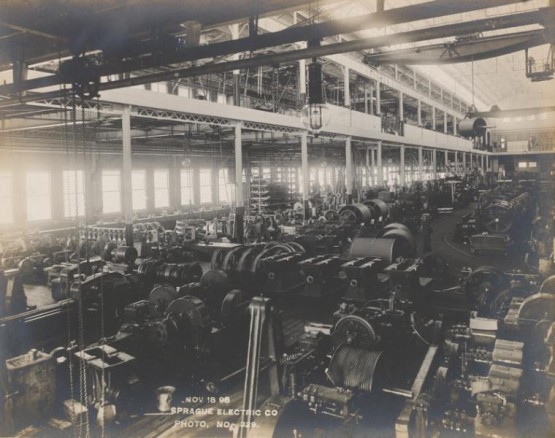 While part of the inquiries Bureau for Open Culture is making in On Symptoms of Cultural Industry involves research into former manufacturing industries in North Adams, specifically the history of Sprague Electric as discussed in recent posts, the workforce today is another focus. Major Fordist manufacturers have largely disappeared from the North Adams and Berkshires region. But a concentration of production is very much part of the texture of this area. And, it often takes place inside the very same factory spaces—now converted lofts—into which the multitude of workers once filed. The workers today are commonly referred to as freelancers—designers, copywriters, illustrators, educators, artists, computer programmers, curators, web developers and animators. In other words, communication is the central crux of their work. They make up a vast networked community of immaterial laborers that are dispersed throughout the world. The Belgian sociologist and philosopher describes this kind of worker:

Immaterial workers work mainly with their head, which they can (and indeed have to) take with them wherever they go. Immaterial labor doesn’t stop, then, when the worker leaves the office. Immaterial workers can easily take their work home, to bed and even, in the worst case scenario, on holiday with them. They are accessible via mobile phones or the Internet, and can plug in to the shop floor at any moment. [1]

This new production scenario and this new kind of workforce are part of the contemporary condition of a culture- and information-making society. In some cases, the precariat workers reside in the spaces of former industry. They are hirable on demand and sometimes exploitable without rights and dispensable without notice. Contemporary life more frequently revolves around this precariat and the lack of community and connection among one another and the exclusion of basic social rights such as health care, job security and sick leave benefits are becoming a cultural norm. Understanding the conditions of these different kinds of workers inside the spaces laid down originally by industrial capitalism is an important part of our intents with On Symptoms of Cultural Industry.

On Symptoms of Cultural Industry by Bureau for Open Culture, presented this summer at Open Engagement and MASS MoCA, will examine these effects on the post-Fordist immaterial workforce. It is essentially a study of the organization of capital under neoliberalist influences.