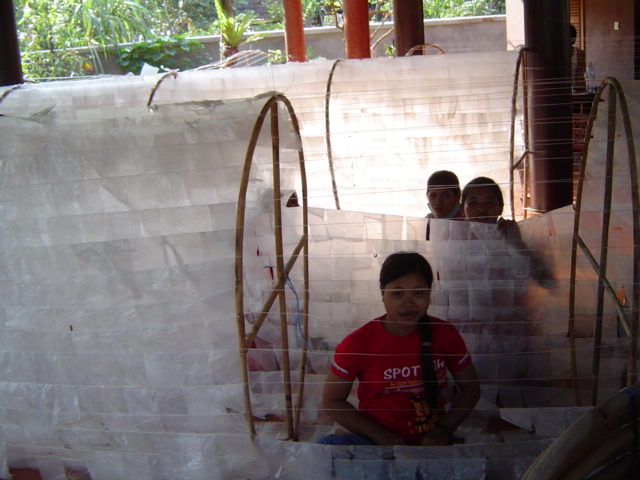 In the past three years, I’ve spent a great deal of time in, and studying, Khmer culture. Since the extremely destructive Khmer Rouge regime ended in 1978, and following a subsequent 15-year civil war, which included bouts without government as well as stretches under Vietnamese-style socialist rule, little infrastructure remained to support art or culture. This is actually an understatement: little infrastructure exists even now to support the life of the majority of Cambodians, who earn less than $60.00 per month. Educational systems, sewage systems, economic and monetary systems, food systems, even working government systems are still barely forming, over 40 years later. Hell, toilet paper is still a luxury here. Traffic lights are new gadgets. Dental plans wholly unheard of.

What does exist—and what has kept the place going through times of excessive strife—are family and kinship circles. These function, stronger even than ever before, and still offer a genuine retort to poverty, failing schools, and lack of jobs common throughout the country.

And so, while officially sanctioned art institutions exist—attended, mainly, by male painters and sculptors—and while international galleries pop up to hock the objects produced, there’s also another kind of cultural work done, more commonly associated with the non-governmental organizations (NGOs) running rampant through the nation. Outside of traditional art contexts, comics are produced, engaging discussions are held, tapestries and meals are collaborated on and shared. In fact, little goes on in Cambodia that cannot be found, in a better-funded form, at Chicago’s Mess Hall. (Excepting geckos.)

My point is, we call something social practices in the US that, in Cambodia, is a given. That is, a given if you have a vision for your work that extends beyond the gallery or art museum (and here, the former are rare and the latter nonexistent). Leang Seckon , the contemporary Cambodian artist I first wrote about here, and his New Zealand-born collaborator Fleur Bourgeois Smith,have just such a vision. Together, they lead an effort called the Rubbish Project. And with a whole lot of other people, make something out of nothing..

Fleur communicated with me via email and acted as translator and interpreter for Seckon, currently preparing for a Singapore show with Rossi Rossi, a gallery based in London.

Anne Elizabeth Moore: The Rubbish Project, which you call a “grassroots indigenous environmental arts movement,” combines your interests in environmental justice, art, and fun. How?

Fleur Bourgeois Smith: Seckon and I envisioned and launched The Rubbish Project in 2006, after he expressed a wish to do something more than just allude to environmental concerns in his visual artwork.

I had recently started a slow MA in Health Psychology and was reading about globalization, NGO politics, postcolonial studies, and critical psychology. Seckon is obviously knowledgeable about Cambodia and how to operate effectively here, and his profile as a leading contemporary artist meant we could imagine and carry out things that could get attention. We think we are first and foremost an art project, but with a clear goal of influencing some general audiences towards better practices, and hoping for that influence to be at many levels. We wanted something grassroots that we could pick up and do things through, and at other times not have so much activity. The very first thing was a performance piece at Human Rights Day celebration at 2006. We are in the process of rethinking what we are doing, trying to get support from the NZ Government and trying to work out how best to link ourselves in here in Cambodia.

AEM: Cultural producers in Cambodia operate under fairly severe but unwritten restrictions on the subjects they may take on (as do journalists, and the leaders of social justice organizations). Yet the Rubbish Project established large, festival-like spectacles that brought attention to key issues of sustainability in the developing nation.

One such project is the giant naga, a mythical seven-headed serpent, you constructed of rattan and flimsy plastic and installed in Siem Reap during spring 2008 for World Water Day. Obviously, such an undertaking—and so far away from your home of Phnom Penh—would involve many assistants. How did you go about finding people to work with you? 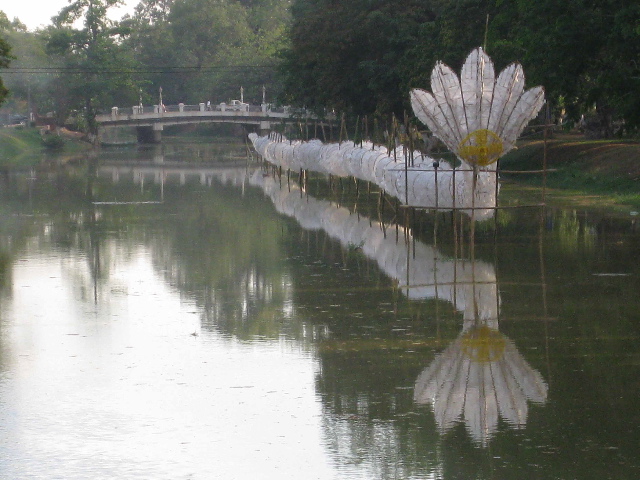 FBS: We were late to find helpers! We were so tired from raising money, planning it all, overseeing the making of the rattan bones, and getting permission, that we actually bought the plastic the day before we went to Siem Reap! Then when we got there we called everyone we knew, and people who had a feeling for what we were making brought people they worked with, or studied with. We did not ever count how many people but it must have been at least 200 different people over a very intense ten days (Seckon thinks 300! He is probably right because one school came over several days with different student groups). We had people as diverse as ANZ Royal Bank staff, clients from the confidential shelter of the Cambodian Women’s Crisis Centre, handicraft artisans from Rajana, and Youth With a Mission short-termers! 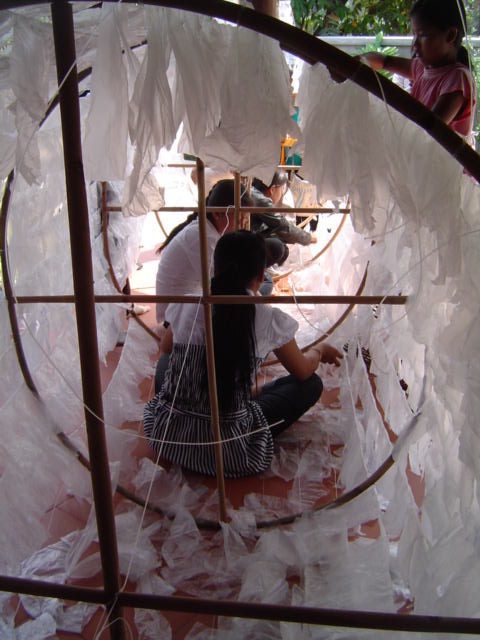 AEM: The naga was intended to address pollution and privatization issues, but a similarly constructed project—the Recycled Fashion Show—used found materials to pull participants into a spirit of collaboration on general issues of environmental sustainability. Can you talk about how that 2006 Human Rights Day project came together?

FBS: We conceived it as a design competition, and there were, I believe, 52 entries, mostly from Cambodians. It was the first big Rubbish Project event, and a huge success due to many factors that came together on the night. We had a meeting and basically told everyone we knew (art students, people working in the arts, fashion industry, etc.), and showed a slideshow of photos from the Internet of the ways people were re-using stuff at that time for fashion and design. Then we had a workshop and played with recycled stuff Seckon and I had bought from a recycling sorting business to make lamps. These were then hung in the garden space of the old Elsewhere [a Phnom Penh event space and retail store] the night of the show.

AEM: How much training goes into these collaborations before the unveiling or event starts? How important is it to you that the individuals involved all consider themselves artists, audience members, or collaborators?

FBS: For the fashion show, we held meetings talking, and that one workshop. For the naga, the main body of volunteers had to staple plastic over the nylon lines. This they didn’t need training for. Some of them also cut the plastic into those pieces. Seckon told them what to do on the day. Also we had a smaller team of six young men who tied all the nylon along the 225 meter Naga. Seckon had the construction planned out, so he showed them for one full day, and then managed the process, which took ten days. We also had men who live on the Tonle Sap lake install the naga on the Siem Reap River. They had to drive eight-meter bamboo poles into the riverbed at exactly 4.4 meters apart! Then they had to attach the naga to these poles. I don’t know how the people who took part consider themselves. It is normal here that the artist is the conceiver and manager of the work (Seckon in this case) and the people are considered to be assistants; volunteers.

AEM: How does the Rubbish Project combat environmental injustice? Do you present it as politically engaged work?

FBS: We don’t want to be labeled as political, and are not part of any advocacy project which is positioned as protesting or whistle-blowing. But we see our work as contributing a wider form of advocacy where we help to raising people’s knowledge of environmental problems such as the effect of plastic in waterways. This was what we focused on with the naga. It was constructed as the event in Cambodia for World Water Day that year.

AEM: How Cambodian is this work, and how international? How do notions of local culture become evident in this work, or notions of universality?

FBS: The Rubbish Project started as a collaboration between him and me. But we are here in Cambodia, and we have joined with people from other places to talk and imagine collaborations that should come about shortly. For the naga, it is obviously rooted in Cambodian culture and the founding myth of the land of Funan. Talking locally about what is happening here is relevant to everywhere, especially developing countries with similar issues to what we are facing. Plastic is everywhere, for example. I think the local and the universal are different but both are present in our minds as we talk about our work.

AEM: The naga was singled out for praise by the King-Father Norodom Sihanouk of Cambodia, a filmmaker, musician, and artist himself. For American audiences, who see federal arts funding slashed almost every year, what might that mean to you?

FBS: The King congratulated Seckon for all his work, and secondly he praised our project for helping the water and health. The King and the Royal family in Cambodia are artists. Artists study at the fine art school, which is right next to both the palace and the museum. These institutions and the Ministry of Culture are very interrelated, as the decoration of the palace was conceived by artists, and the royal dancers and musicians studied here too. To have his support means a lot to us both. 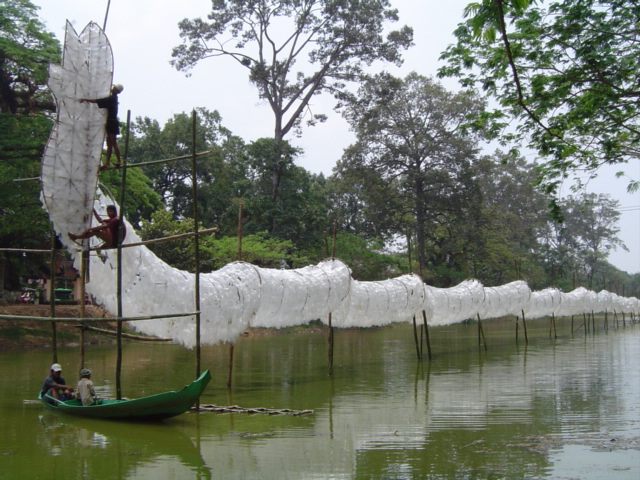