“The Circulation of Knowledge” is a series of contributions from artist Dustin O’Hara about his collaboration with the Santa Cruz public library.

This essay reflects a traversal of living mythologies, a collection of moments and stories that took the form of a collaboration with the Santa Cruz public library system. The ‘material’ collected has been exhibited and archived, and within this writing I will narrate my process of engagement – a textual practice that attempts to solidify and simultaneously problematize the boundaries of where this project might begin or end. This is an attempt to frame the project in a way that foregrounds inter-dependent collaboration as it exists inseparable from an assemblage of institutions and unacknowledged historic actors.

While much of my thinking can be directly linked to a lineage of late-20th-century procedural and conceptual art practices that were concerned with an art-life relationship, I currently find the pragmatic question of how institutional and infrastructural conditions inform behavior and beliefs to be much more interesting. How do we conceptualize the relationship between individual agency, interdependence, and structural conditions? ‘Whether cast in aesthetic or social terms, freedom and expression are not opposed to obligation and care, but in fact depend upon each other…’ (Jackson 14). What stories will we hold onto? And what will be forgotten?” – Dustin O’Hara

This is the story of a retired cop car and librarians and library staff determined to go beyond the walls of the library building, operating within a political climate that has become increasingly skeptical, if not suspicious, of their function and value. Like a receding tide leaving some unlucky fish to dry, the public programs that were once considered staples of a modern democratic society are being systematically dismantled and forced to argue with each other for their own survival. 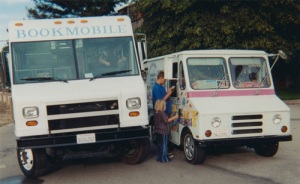 From Catherine Steele's personal photo collection. Appropriated for a series of canvas prints.

Santa Cruz Public Library Outreach is a small team that, like most of the library staff, starts their day at the library’s main office. But what distinguishes Outreach from the rest of the library staff is that rather then patrons coming to the staff and librarians, the Outreach staff goes to their patrons. Most iconically known for the Bookmobile, Outreach operates on a two-week to monthly cycle of visiting rural communities, low-income neighborhoods, senior living facilities, farm labor camps, and the county jail. Outreach uses its limited resources to account for the contexts that their patrons inhabit, making library services available to those that would otherwise not have access.

Externalized Costs and the Beach Flats

Beach Flats, good ole Beach Flats. Is it because this stop is on a Friday and that Friday also happens to be payday? Or is it because this stop is right next to the park and, unless it’s raining, there’s always the happy sound of kids squealing in the background? Whatever the reason, Outreach staff shares a certain fondness for the Beach Flats community. Besides being one of our busiest stops, the Beach Flats is probably the most diverse stop on our 27-stop schedule: the wheelchair-using woman who loves British melodramas; the deaf brothers who teach Mom sign language AND English; the neighborhood matriarch who sells us tamales after her transaction; the conspiracy-theorist who keeps us abreast of the latest Federal Whodunit; the jazz musician who frequently utilizes our Materials Request Forms, these are just a few of the standouts and, besides being a colorful bunch, they all know each other by name. Perhaps that’s why we love serving the Beach Flats, it’s a neighborhood in the best sense of the word, a place where anyone belongs, the Outreach Ideal manifest. (SCPL Monthly Reports)

The previous quote was taken from the archive of monthly reports written by Outreach staff. While living in Santa Cruz, I’ve frequently walked through the Beach Flats neighborhood, especially to visit their community garden, but this time I was there to document the Bookmobile’s visit. I had checked out a large video camera from the university and, while recording a shot of the Bookmobile and neighborhood, a twenty-something Hispanic man cycled past me. He looked at me and in an aggressive tone told me I better not be filming his hood. He cycled around me as I explained to him that I was working on a project with, and about, the Bookmobile. He told me he would give me the benefit of the doubt (this time!) and cycled off to his apartment.

Some twenty minutes later when the Bookmobile patrons cleared out, Eric the Bookmobile driver told me I should meet with Veronica. Eric explained that Veronica had been a patron of outreach services and the Bookmobile as a child and was now a coordinator in the beach flats and was working with the current outreach staff to bring library services to local children. A few days later I met Veronica at her office. She was friendly and welcoming, among the stacks of papers and office supplies were framed photos of children. Veronica lives and works in the Beach Flats community, and grew up in the nearby town of Watsonville in the Freedom area after her parents had come to the area as farm workers.

We lived in fairly substandard housing, but it was what our family could afford in rent. In a mini-neighborhood, where there were ten to fifteen at the most, little shacks is what I’d call them. With a dirt area with chickens running around…We spent most of our time playing and having fun…The local elementary school must have had a partnership with county libraries because that is where I met Catherine Steele, who later I would see through the Bookmobile once we moved to Santa Cruz. But at that point they would open up the little library at the school after hours. I remember we’d go home and ‘oh the library is open today’ so we’d run back to the elementary school…and most of our homes didn’t really have books, or access to books was minimal. (Lopez-Duran)

Veronica would eventually go on to study anthropology as an undergraduate at Santa Clara University. After finishing her undergraduate studies, she returned to the area to be near her family and pursued graduate studies in the Sociology Department of the University of California Santa Cruz. During the first couple years of being back, much of her focus was on helping her brother finish high school, but eventually Veronica become heavily involved in housing issues surrounding the Beach Flats community. The Beach Flats have been historically, and remain to be, a low-income immigrant neighborhood. Cornered between the San Lorenzo River and the Santa Cruz Board Walk, the Beach Flats sea level altitude renders it vulnerable to floods. Largely a Spanish-speaking neighborhood, it is part of a network of Mexican communities that are geographically spread across the county.On June 6th 2005, at a Santa Cruz Library Joint Powers board meeting for restructuring the library, Veronica spoke in support of outreach services.

Growing up as low-income Latina in the County of Santa Cruz has not been easy… As a young child… I could not even tell you where the public library was. My family, like many others in our complex, depended on the Bookmobile to gain access to books. Due to the economic situation that my family faced, purchasing books was never an option… I come here as someone who would not have had access for most of my youth had it not been for the Bookmobile services. And now, I come before you as someone who is trying to make a difference in communities like the one I grew up in. … one of my top priorities is the education of youth in Beach Flats. …we have established an after school program entitled “Imagine”. Imagine is a four day a week academic program for K-12 youth in Beach Flats…The Bookmobile and Outreach services play an important role in the Santa Cruz library system and that is to ensure that those least likely to be able to access even the free public libraries are able to access books and other informational materials. I would like to think that the Bookmobile and the staff I have known since being a young child at the Freedom Elementary School… have played a small but important role in helping me be who I am today. (Lopez-Duran)

Veronica’s point about outreach actively ensuring access to “those least likely to be able to access” the standard library services bring up a number of issues only one of which I would like to address: externalized costs. Outreach by its very nature accounts for externalities that standard services do not account for. From the main branch perspective, all bodies that enter the door are considered equal. This is a fantastic ideal for those bodies that pass through the door, but it fails to recognize that not all bodies are equal.

Whether it be homebound seniors, the incarcerated, rural communities, working poor, or farm labor camps, there is a great variety of circumstances that render people unable to meet the baseline notion of access. While geographic distance and lack of transportation are obvious obstacles to library access, Outreach patrons may face any number of less obvious but just as real barriers from entry.